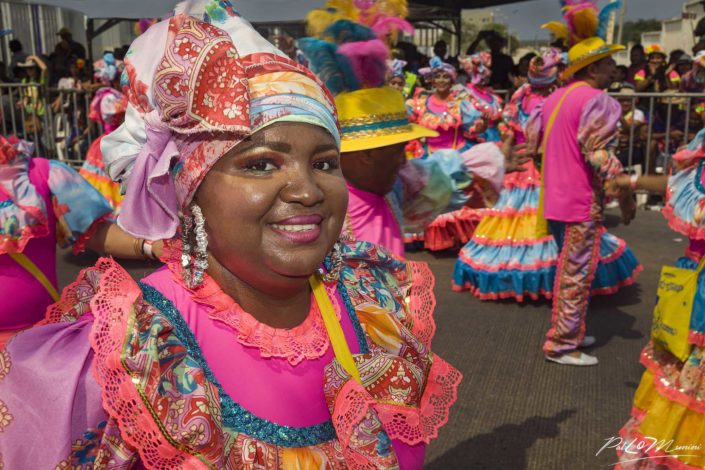 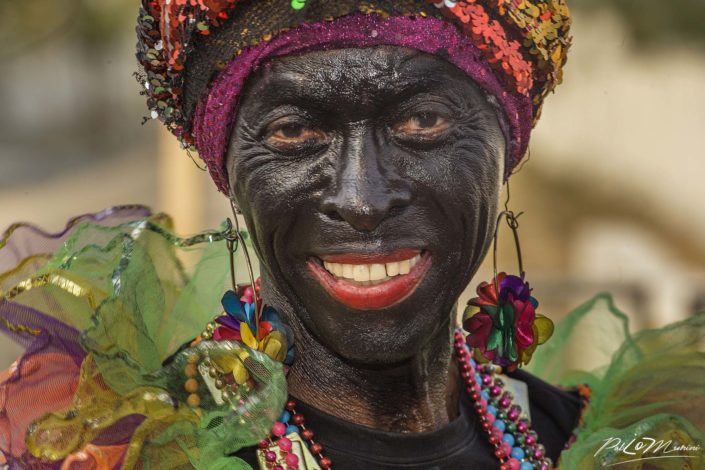 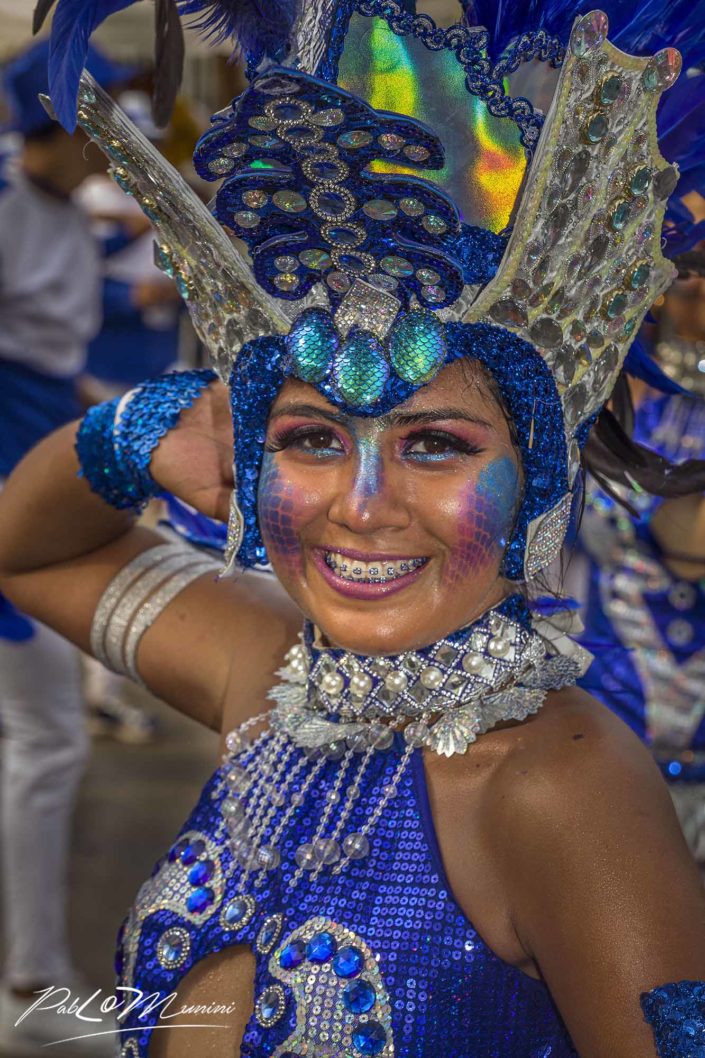 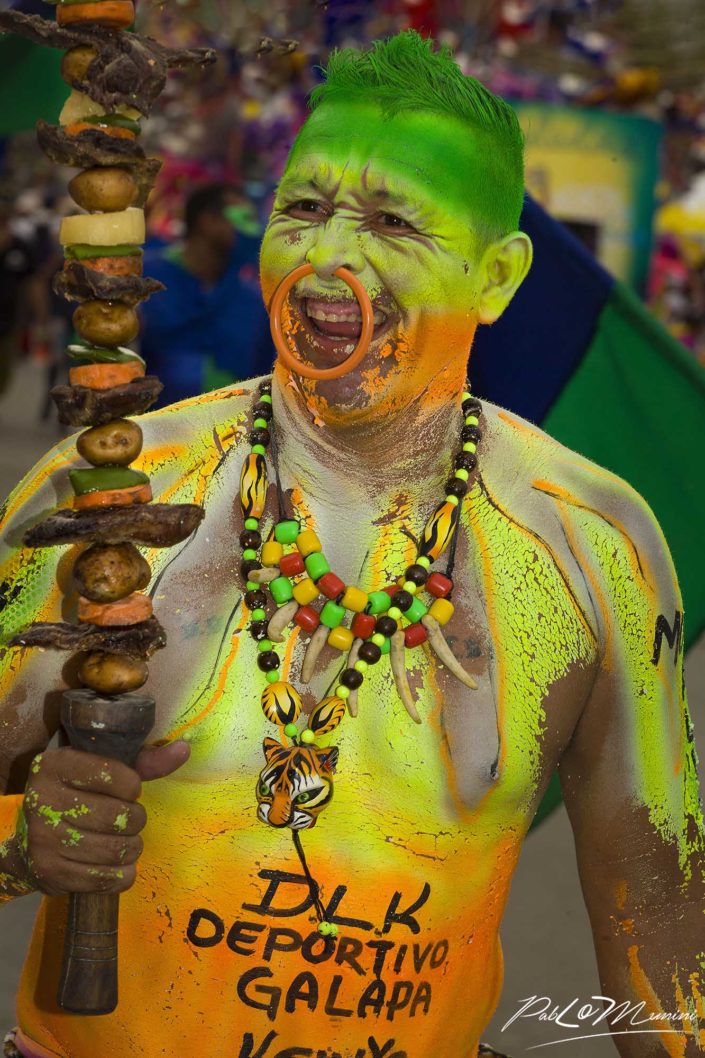 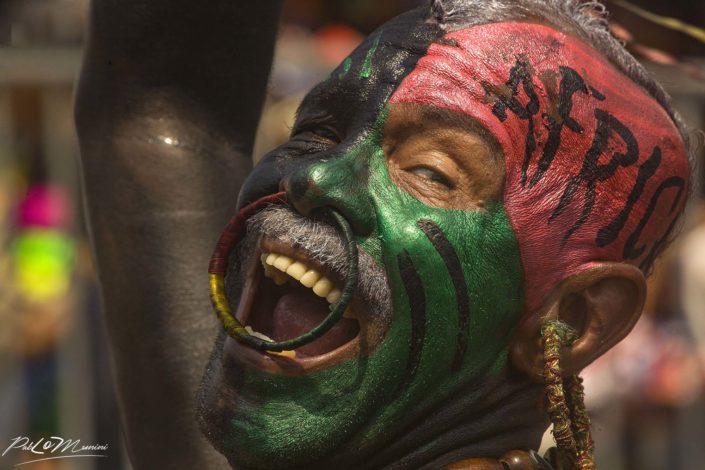 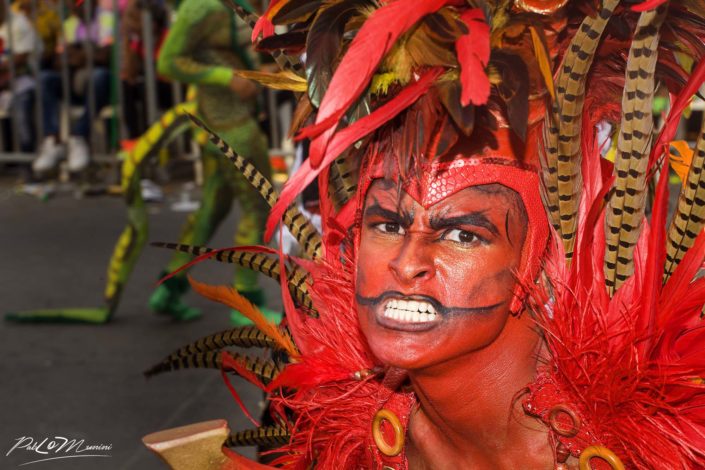 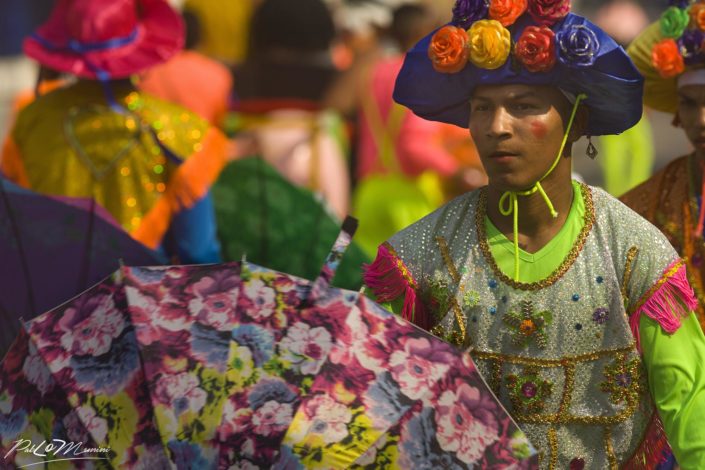 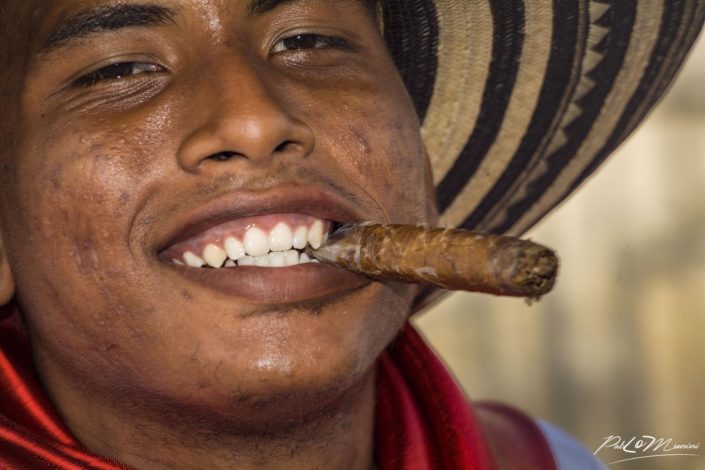 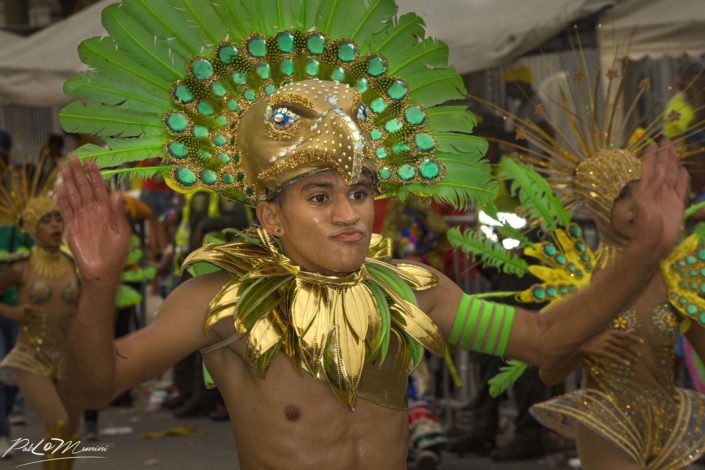 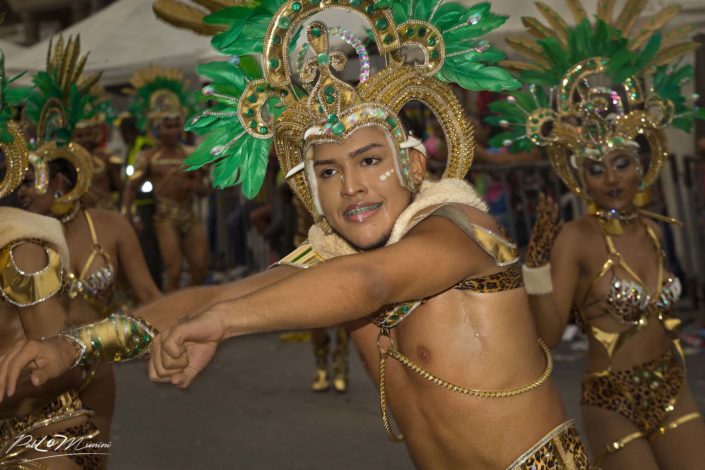 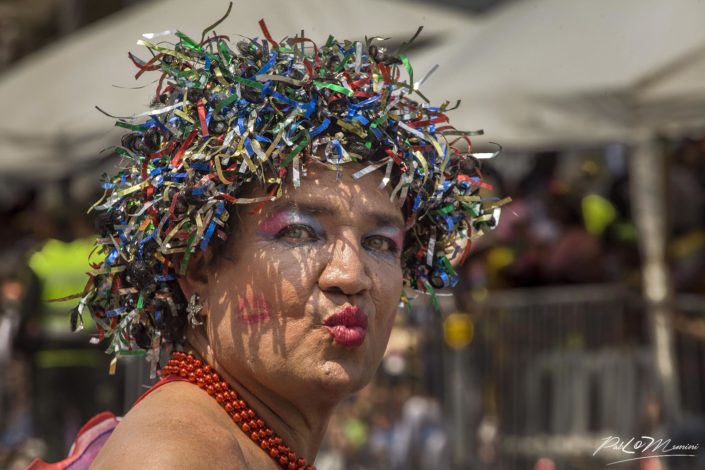 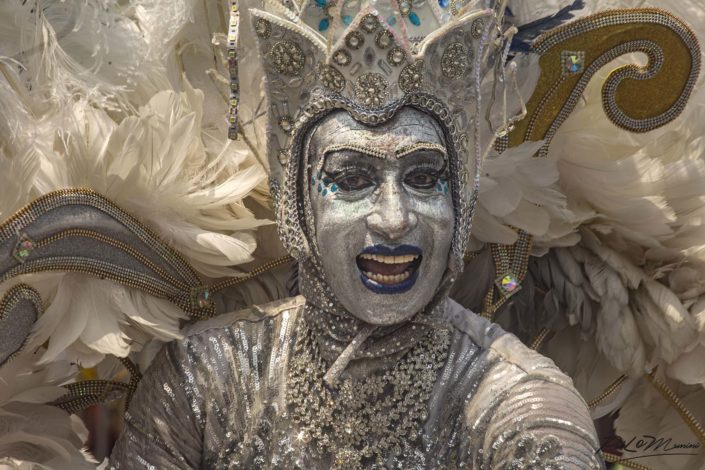 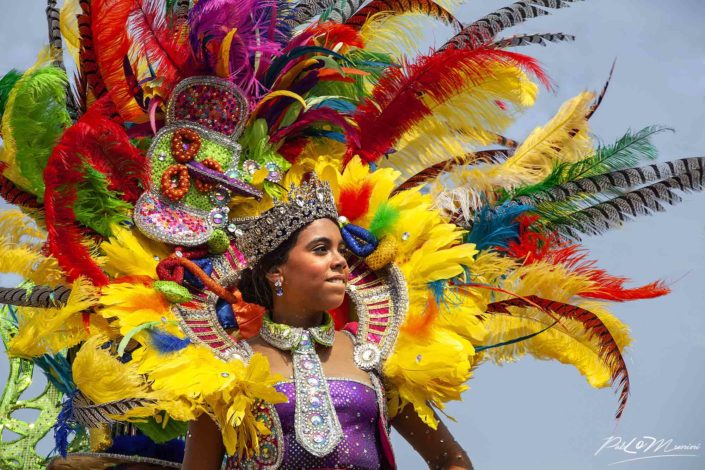 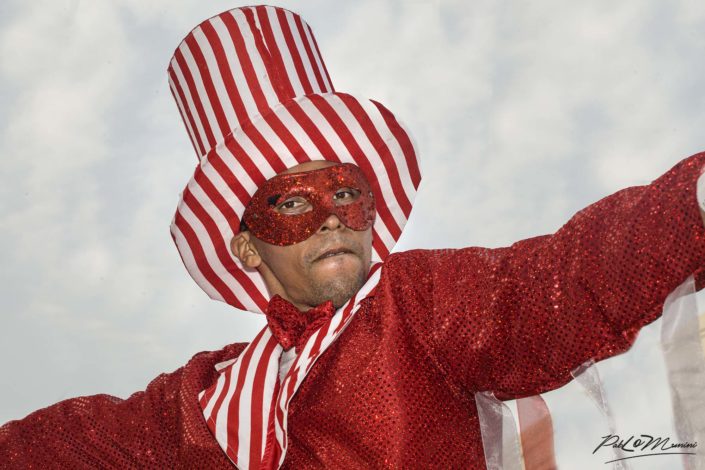 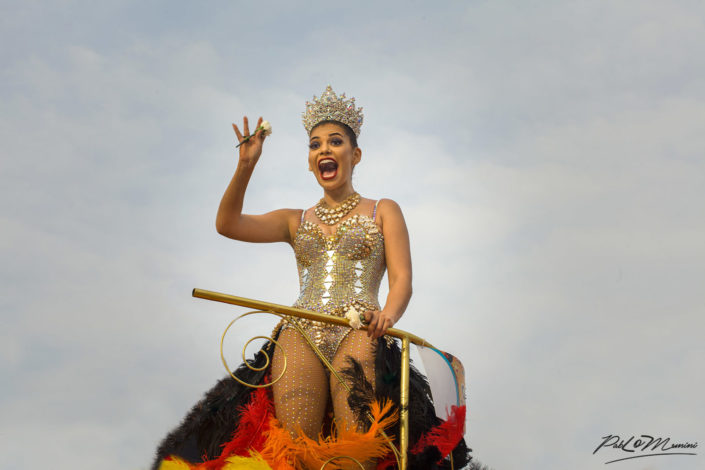 In my room at the hotel “El Prado” I could hear the music from the bar all night. The next day the hotel manager looked amazed when I asked him what time that evening the music would end, so that I could have some silence and sleep. On the second night, it wasn’t just one source of music, but now there were two different Caribbean rhythms drifting in each of the windows of the room. Music and rhythm are the essence of the “costeña” life, the life of Barranquilla, and so there is no other alternative than to get used to sleeping with its “cumbia” music in the background all night. I understood then that I just had to accept that I was in “Curramba la Bella” (Curramba the beautiful), and that it was carnival time.
The Barranquilla Carnival is a tradition over one hundred years old, and it has been distinguished by UNESCO as a “Masterpiece of the Oral and Intangible Heritage of Humanity.”
The official opening of the Barranquilla Carnival happens on a Saturday with a parade where the carnival queens throw flowers to the public. It is called the “Batalla de Flores”  (Battle of the Flowers) and is the major event of the carnival. It was held for the first time in 1903, as a joyful way to renounce violence, and was devised by the Barranquilla general Heriberto Bengochea to celebrate the end of the Thousand Days’ War.
On Sunday the “Grand Traditional Parade” takes place, and on Monday 40th Street is filled with the “Grand Fantasy Parade “, during which everyone comes to see the carnival queen entertain them with her costumes and dancing.
The Barranquilla Carnival has its own quintessential character that identifies it. Called “La Marimonda”, his costume consists of a mask made out of a sack, with a long phallic-looking nose and big ears. He wears a pair of old pants and an old jacket inside out, and walks around making a disturbing sound with a whistle known as “pea-pea”. The Marimonda was created by a poor Barranquillero who improvised the costume to mock high society and the government. This is why he wears a necktie, to show his antipathy to all the officials and high-ranking people who get paid without really working. Over time, the meaning of the Marimonda has changed, and today he symbolizes mostly just a jolly person, and a “mamador de gallo “ (Colombian spanish), meaning a joker, or someone who jokes around with everyone at a party.  Carnival caribbean Barranquilla photography
The Barranquilla Carnival has other archetypal figures and costumes: “Maria Moñito”,”El Descabezado”,”El Mohicano Dorado”,”Cantinflas”, “Garabato”, “Monocuco”, “Son de Negro”,”Congo”,”Los cabezones”,”Los diablos arlequines”, and “Joselito”, the dead man Barranquilla mourns over at the end of the carnival. You can see many of these characters if you visit the Barranquilla Carnival galleries on my site.    Carnival caribbean Barranquilla photography
The slogan of the 2019 Carnival was: “Para que lo baile todo el mundo!”  (May the whole world dance!), as a tribute to the music of the Carnival, its rhythms, and the creators and performers who make Barranquilla a unique cultural event for Colombia. The carnival logo was created by graphic designer Alfredo Miranda, and is titled “A night of music under Barranquilla’s moon”’. It is composed of elements melding traditional cultural images of the carnival with musical instruments, and was inspired by the song “Luna de Barranquilla” (moon of Barranquilla) by Esthercita Forero. Forero, a singer and songwriter, is considered “the eternal bride of Barranquilla”, and the city paid tribute to her in 2019 to celebrate what would have been her 100th birthday.
The Carnival on 40th Street, which is captured in the photo galleries that I present to you here, is lavish in color, infinite in character, and brimming with the flamboyant multitudes who fill the celebration. The moments are intense and frantic, and capture for you the six or seven hours each day that fly by as if they were only a few minutes.

I spent two exceptional, incessant days in Barranquilla, taking photos under a scorching sun from a bleacher on the famous 40th Street. I mingled with the public that dragged me along in its uncontrollable enthusiasm, because as the Carnival’s motto says: ” Quien lo vive es quien lo goza “ (Those who live it are those who enjoy it).
On Sunday night, wearing my “sombreto vueltiao ” (typical hat from Colombia’s Caribbean coast) and feeling the effects of the sun on my skin, I said goodbye to Barranquilla, keeping forever with me the most beautiful and unforgettable memories. From the hotel to the airport, each house I passed had its own decoration, was telling me its own story, and had its door open letting its music pour outside.
While checking in at the airport, the woman behind the counter smiled when she heard me singing: “I want everyone to know that in Barranquilla I stay.” The images dedicated to Barranquilla on my site here are proof that I will indeed remain in “Curramba la Bella” forever.

Costumes
Because during Carnival everything is allowed and Barranquilleros like to push the limits, they often not only wear their costumes, but also give them a life of their own. Costumes are expected to adhere to tradition and display specific physical attributes. They are generally made out of materials on hand, because most people don’t have the means to pay for expensive ones. Each costume adheres to and reflects an attitude or specific personality, generally either a funny one or a disrespectful one. Some of the traditional costumes of the Carnival de Barranquilla include María Moñitos, El Descabezado, El Mohicano Dorado, La Loca, El Siemprevivo and Cantiflas, among many others.

Joselito de Carnival & his widows: On the last day of Carnival, a few new characters emerge. Joselito is a manifestation of the Carnival, and on the final day, Tuesday, he is found dead from too much drinking and partying! Open coffins with a dead Joselito lying inside are featured in the parades on Tuesday, though Joselito often rises from the dead to salute the crowd. This character is supposedly based on the true story of a man who disappeared during Carnival and was found unconscious on the street. His family organized a funeral for him, but during the funeral procession he woke up and sat up in the coffin!Carnival caribbean Barranquilla photography

María Moñitos: Emil Castellanos, a humble resident from Las Nieves neighborhood, created the costume that became known as María Moñitos. The story goes that one day he found out his wig had been stolen. Since he was poor and could not afford a new one, he tied his hair with many braids (moñitos), put on his wife’s dress and high-heeled shoes, and went out to the street to celebrate Carnival. Castellanos approached couples and accused men of being unfaithful, of cheating with other women, kissing them and driving them insane. He would only leave them alone when they gave him some money. Soon he became a symbol of the Carnival of Barranquilla. He died young but the character he created continues to be immortalized by his son and hundreds of carnavaleros.

El Descabezado: This costume was inspired by a historical period characterized by violence and it has been present at the Carnival of Barranquilla since 1954. Its creator, Ismael Guillermo Escorcia Medina, was inspired by his childhood memories and particularly by the assassination of political leader Jorge Eliecer Gaitán. This historical event marked the beginning of the period known as La Violencia that ran from 1946 to 1957. During those years, Escorcia Medina frequently saw corpses floating down the Magdalena River, some headless, others dismembered. He decided to create something that would be a continuing testimony of that time and he came up with the idea of creating a costume featuring a headless man he called El Descabezado.Carnival caribbean Barranquilla photography

The Mohicano Dorado was inspired by the pre-Columbian legend of El Dorado. Represented by Carlos Cervantes, the costume is an allegory to Colombia’s indigenous population. El Dorado’s golden body was also the inspiration for the costume worn by the carnival queen during the Grand Traditional Parade in 2011.  Carnival caribbean Barranquilla photography

Cantinflas: For over fifteen years, Enrique Morales and Carlos Julio Castro de la Hoz have taken advantage of their physical appearance to impersonate the famous Mexican comedian Cantinflas during Carnival events. Their faces are almost identical to his, and they mimic him with the same funny speech that made the original character so successful. They not only look like Mario Moreno, Cantinflas’ real name, but they act as if they were the real Cantinflas, an icon of Latin American popular culture.